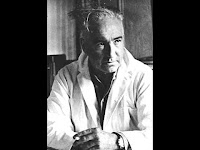 Reich died in jail in America nearly sixty years ago, after having most of his books burnt on the orders of the American government. As a young psychiatrist in Vienna, in the mid - 1920 he had been a brilliant pupil of Sigmund Freud and part of the inner circle in the growing world of psychoanalysis. Many of his ideas are in use today; often unacknowledged However, many distorted idea and rumours were circulated about him and his work during his life and after his death.

I became interested in Reich's work in my late teens sensing that his connection of the body, energy,  sexuality, repression and political ideology were key. His book Character Analysis showed some of his therapeutic approach; based in the early work of Freud. This book is still recognised as one of the foundations of body psychotherapy; an approach that is coming back in to recognitions neuroscience supports its principles.

In 1933 he published The Mass Psychology of Fascism and soon after had to flee Hitler; ending up living in the United State. You can listen to a recent radio interview on Reich. Click Here.

After he died, on his orders, all his papers and laboratory notes were all locked away for fifty years. They are now available and at last a film is being made which will give an accurate account of Reich and his ideas using his original notes. The film has been funded through crowdfunding. It has been shot and now money is needed to edit it. They have now got about half the money they need. I have made a small contribution. If you would like to do so then Click Here to go to Crowdfunding Page.
Posted by Martin at 05:52 No comments:

Martin
London & Salisbury, United Kingdom
I have worked for over 35 years as a psychotherapist, counsellor and supervisor. I have a private practice in London and near Salisbury in Wiltshire..